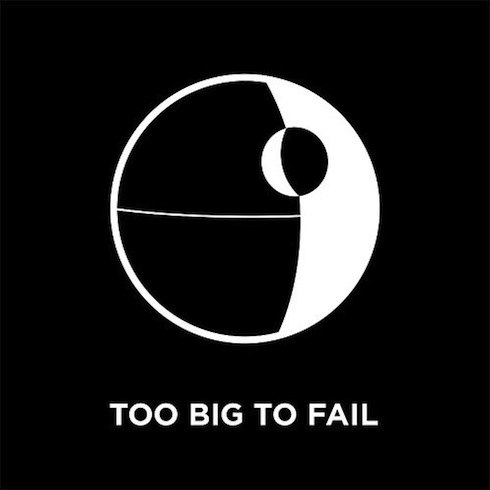 First, a quick housekeeping note: About a month ago, I got a call out of the blue from Vermont Senator Bernie Sanders, who’s one of my favorite people and something of a political hero of mine. Bernie helped me many years ago, back when he was still a congressman, by letting me tag along for weeks for a story about how the House works that ultimately was called “Four Amendments and a Funeral” – an experience that taught me an enormous amount about how our government operates, and also in a weird way left me less cynical, as it showed there were still plenty of avenues where a determined individual could work the system.

In any case, Bernie a month or so ago asked me to join him in Vermont for a pair of town meetings on Wall Street issues. It’s a tremendous honor and both events will be happening next Friday, one at the University of Vermont in the afternoon, the second in downtown Burlington in the evening. Entitled “Taking on Wall Street and the Big Banks,” Bernie and I will join in a public discussion about a lot of things, including the power of the financial sector and what can be done about it. It’s a very cool thing and I’m really looking forward to it – if you live in the area, please come by.

I mention this as a backdrop to some news I didn’t get a chance to post last week. Since part of the Sanders discussion is going to be about “What we can do about it,” it’s worth noting that at least as far as the Too Big to Fail issue is concerned, there’s been a bit of an interesting development of late – some momentum is building in Washington toward reforming the banks.

Start with the most recent news: last week, Sanders announced plans to introduce an interesting new bill, one that’s a direct response to comments made recently by the likes of Eric Holder about the difficulty in prosecuting big banks. Holder said some institutions have grown so large that prosecuting its executives may have a “negative impact on the national economy, perhaps even the world economy.”

This was an extraordinary statement to come out of the mouth of the Attorney General – essentially announcing in advance a disinclination to prosecute a whole class of people. It’s Minority Report in reverse – pre-noncrime. What was even more bizarre was that this wasn’t an inadvertent comment or a slip of the tongue, it was absolutely consistent with comments made by other DOJ officials late last year after the slap-on-the-wrist HSBC (money-laundering) and UBS (rate-fixing) settlements. Worse, after Holder and other prosecutorial pushovers like Lanny Breuer made these comments, there was utter silence from the White House, making it crystal clear that this is a coordinated policy.

What the Sanders bill would do is force Holder and the White House to actually spell out the policy. It would give Treasury Secretary Jack Lew 90 days to compile a list of all the financial institutions that they think are too big to prosecute. The list would include “any entity that has grown so large that its failure would have a catastrophic effect on the stability of either the financial system or the United States economy without substantial government assistance.”

But this isn’t an isolated thing. Bernie’s bill comes on the heels of a series of developments that, to me anyway, signal a shift in thinking on this issue on the Hill.

Back on February 20th, Bloomberg published a piece called “Why Should Taxpayers Give Big Banks $83 Billion a Year?” The piece cited new research (which backed up a previous study by Dean Baker and Travis McArthur a the Center for Economic and Policy Research) showing that the Too-Big-to-Fail status of certain big banks provides a massive silent subsidy. Because lenders know the government will never let companies like Chase or Goldman fail, they charge them less to borrow money. From the Bloomberg piece:

Lately, economists have tried to pin down exactly how much the subsidy lowers big banks’ borrowing costs. In one relatively thorough effort, two researchers – Kenichi Ueda of the International Monetary Fund and Beatrice Weder di Mauro of the University of Mainz – put the number at about 0.8 percentage point. The discount applies to all their liabilities, including bonds and customer deposits.

Apply that 0.8 percent advantage to America’s ten biggest banks, and you’re talking about an annual subsidy of about $83 billion. As the Bloomberg writers noted, that’s tantamount “to the government giving the banks about 3 cents of every tax dollar collected.”

Fast forward a few weeks. The Senate is in full budget-debate fury, with members pulling all-nighters and people on the Hill generally losing their minds. In the middle of all of this, Republican Senator David Vitter and Democrat Sherrod Brown – the same Senators who have been planning legislation to cap the size of banks, a revived version of the failed Brown-Kaufman amendment from the Dodd-Frank bill – offered a non-binding amendment to the budget that would direct the government to end the subsidies and advantages banks derive from the perception that they are Too Big to Fail.

The key word in this story is “non-binding,” but here’s the cool thing: the amendment passed unanimously. By a vote of 99-0, the entire Senate agreed, at least in principle, that the banks should not be getting that extra $83 billion a year.

Right after that, Oregon’s Jeff Merkley proposed a similar amendment, calling for the creation of a deficit-neutral reserve fund that would facilitate the prosecution of “Too Big to Jail” companies. The non-binding amendment, which basically piggybacked on the sentiment of the Vitter-Brown resolution, passed in a voice vote with, I understand, no opposition.

These symbolic votes came in the wake of other significant defections on this issue. For instance, eyebrows raised all over Wall Street toward the end of last year when Bill Dudley, the chief of the New York Fed, gave a speech sharply rebuking the TBTF banks.

The New York Fed, remember, helped create the TBTF problem, through the policies of its former chief Tim Geithner. The bailouts and Fed-brokered mergers (like the Bear-Chase deal, the Wells Fargo-Wachovia deal, etc.) that Geithner quarterbacked led to the creation of many of the super-sized companies we’re talking about now as problem firms.

Yet Dudley in this speech came out, if not swinging exactly, at least not with his arms wrapped in Geithner-esque fashion all the way around those firms:

I am going to focus my remarks today on what is popularly known as the “too big to fail” (TBTF) problem. In particular, should society tolerate a financial system in which certain financial institutions are deemed to be too big to fail? And, if not, then what should we do about it?

The answer to the first question is clearly “no.”

Dudley went on to lay out more specific problems. Most notably, the Fed had asked all of the TBTF companies to draw up “living wills,” i.e. plans for how they would unwind in the event of a bankruptcy or some other disaster. It seems the Fed was shocked when those “living wills” started trickling in – reading between the lines of Dudley’s speech, one guesses that the banks basically scribbled half-assed plans on napkins and dropped them through the Fed’s mail slot.

“This initial exercise,” Dudley announced, “has confirmed that we are a long way from the desired situation in which large complex firms could be allowed to go bankrupt without major disruptions to the financial system and large costs to society.”

All of this is part of an ongoing narrative in which more and more people in positions of power are being shocked to action by the apparent incorrigibility of the major banks. The Hey, blow me, fellas attitude that guys like Jamie Dimon keep bringing to the Hill and/or to regulatory meetings is starting to lose its charm, apparently.

On the Fed side, Dudley’s speech was just the latest in a succession of forceful statements by regional Fed chiefs about the TBTF problem, with the most well-publicized and articulate arguments coming from the Dallas Fed and its outspoken president, Richard Fisher.

On the Hill, the revival of the Brown-Kaufman amendment through the Brown-Vitter efforts was just one sign of a change in the weather. A January PBS Frontline special on Wall Street and the lack of prosecutions of major banks apparently infuriated members on both sides of the aisle. Particularly infuriating, apparently, were remarks by Lanny Breuer about the government being reluctant to prosecute for fear of upsetting the economy. Days after the program aired, Sherrod Brown and Iowa Republican Chuck Grassley sent a letter to Eric Holder demanding an explanation.

That set the stage for the non-binding resolutions in March, which in turn is followed by this Sanders bill, which is floating around in the Senate atmosphere alongside the Brown-Vitter concept.

A lot of people are skeptical that any of this is meaningful, but there was similar skepticism about the effort to secure a public audit of the Federal Reserve, which ultimately did take place thanks to a bipartisan coalition built by Sanders and Ron Paul. Although many Paul supporters were disappointed with the narrowed scope of the final legislation – the audit was one-time-only and only covered a brief period – it still did happen and it was a major victory, considering that members of Congress have been trying to put a leash on the Fed for years without much success (famed Texas congressman Wright Patman spent much of a long career trying in vain to force open the Fed’s kimono).

All of this, plus the recent hearings on Chase and the London Whale episode led by Carl Levin and John McCain, are just hints that more and more elected officials are a) genuinely freaked out by the potential disaster these companies could cause, and b) catching on to the fact that the public increasingly favors breaking these companies up. According to a recent Rasmussen poll, for instance, 50 percent of Americans favor breaking up Too Big to Fail banks (crucially, only 23 percent oppose; 27 percent were undecided). A HuffPo/YouGov poll from a few days ago showed similar sentiment.

What does that mean? At minimum, it means politicians will see an angle in talking about breaking up the big banks. The math on how that leads to real action always involves figuring out just how much the fear of offending a major fundraising and lobbying power will push elected officials off the track of following public sentiment. It takes more than a 50-23 poll to knock the U.S. Congress off the Wall Street teat.

It’s a testament to the silent power of the 1 percent lobby that it’s taken even this long for even the faint possibility of bank breakups to pop up on the horizon. But if you squint, you can see it now – just barely, but it’s there.