“If you don’t like the growth of giant corporations, stop giving them your money,” said Jeff Milchen (Reclaim Democracy’s Executive Director at the time) in 1997. While this does not suggest exercising our power as consumers is sufficient by itself to solve the problem of runaway corporate power, we too often find the importance of our spending choices overlooked or diminished in the work to revitalize democracy. Since most of the world’s largest corporations sell directly to consumers, we certainly do have much to gain by finding opportunities to decentralize power with our own purchases.

Milchen later went on to found the American Independent Business Alliance (AMIBA), a non-profit organization helping communities build vibrant local economies based on independent community-based businesses rather than absentee-owned companies. It also builds a genuine pro-small business / pro-community voice to counter the corporate advocacy of entities like the U.S. Chamber of Commerce, which often pretend to speak for small business. While AMIBA focuses heavily on providing direct support to the community organizations that comprise its 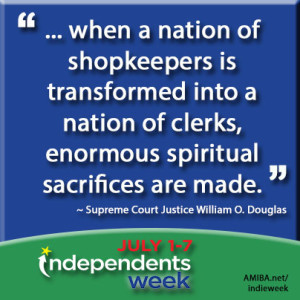 Independents Week is a campaign that occurs the first week of July each year. While AMIBA provides a wide array of templates and support material, the campaign is executed through community organizations and individuals around the country. Independents Week engages citizens in celebrating entrepreneurial spirit and the freedom to control one’s own livelihood, rather than being dependent corporations. It also emphasizes the importance of local ownership and control for communities and affirms citizens’ role in shaping their community’s future.

We encourage readers to recognize both the value of integrating a pro-local business perspective with work to revoke illegitimate corporate power, and make clear that one can be an active advocate for community-based businesses while working to stop corporations from wielding illegitimate power.

Taking advantage of the ready-made tools for Independents Week is one simple step that just might spark interest in more ambitious initiatives, such as starting an Independent Business Alliance to differentiate between the interests of Wall St. and Main St., and help your hometown businesses prevent corporatization of your community.