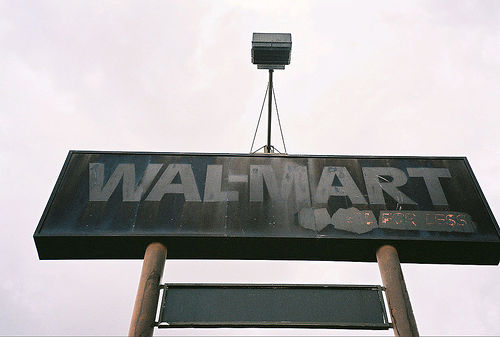 By Will Evans
First Published Nov. 16, 2012, in California Watch

A California appellate court has dealt a blow to Walmart’s strategy of using petition drives to push through approval of new superstores while avoiding California’s environmental law.

In a cookie-cutter pattern documented by California Watch, the mega-retailer bankrolled local signature-gathering efforts to build superstores or repeal restrictions on big-box stores in five California cities last year. Once 15 percent of local voters signed the petitions, city councils had to either approve the projects or hold a special election, which can be costly. Wal-Mart then urged cities to approve the petition rather than send it to voters, angering some officials who felt bullied.

Wal-Mart has said the strategy is necessary to avoid politically motivated lawsuits under the California Environmental Quality Act.

Voter-approved ballot measures that stem from petitions are exempt from environmental review and protected from CEQA lawsuits. Wal-Mart argued that when a city approves one of its petitions without an election, the project would be protected, too.

“The legal issue is important and calls for speedy resolution,” the opinion stated. “Developers’ strategy of obtaining project approvals without environmental review and without elections threatens both to defeat CEQA’s important statutory objectives and to subvert the constitutional goals of the initiative process.”

The Fresno-based 5th District Court of Appeal disagreed with a 2004 ruling by a different appellate court, setting up the possibility that the issue will ultimately be resolved by the California Supreme Court.

The Fresno court held that a petition signed by 15 percent of a city’s voters doesn’t carry the same power as a majority-approved ballot initiative. “To hold otherwise would authorize rule by a few – the antithesis of democracy,” it said.

The case centers on a Wal-Mart expansion project in the small Gold Country city of Sonora. Attorneys who often target Wal-Mart with environmental lawsuits have sued over its use of the initiative process there, as well as in the San Bernardino County town of Apple Valley and the Silicon Valley suburb of Milpitas.

The city of Sonora argued in court filings that its citizens supported the proposed superstore so there was no point in holding an election. Wal-Mart argued that it would be unfair to “force city councils to incur unnecessary and unwanted expenses to hold elections.”

The city’s and company’s positions reveal “their failure to appreciate the importance of elections in the initiative process,” the court stated. “The results of an election represent the will of the people. A petition signed by 15 percent of the voters does not.”

“These people just want to delay a process that should be part of a free market economy,” he said. “I don’t think it’s the city’s role to decide who can compete.”

Wal-Mart spokeswoman Delia Garcia said the existing Sonora store “has served customers faithfully and made a positive impact on the local economy.”

“We are committed to providing customers the broadest selection of products to meet their family’s needs and will evaluate all options for moving forward,” Garcia wrote in an email.

The court’s ruling goes beyond Wal-Mart, said Brett Jolley, the attorney who brought the suit.

“The opinion closes what could have been a major loophole in the CEQA process which would have allowed the wealthiest developers … to avoid CEQA and public elections by utilizing the initiative process,” he wrote by email.

Jolley quoted California Watch’s story in his opening brief, but Wal-Mart objected, moving to strike that part of the petition. The judges decided that the reference to the article did not alter their conclusions and denied Wal-Mart’s motion.

San Diego-based lawyer Cory Briggs, a longtime thorn in the side of Wal-Mart, said he would use the ruling to revive a similar lawsuit he is pursuing in Apple Valley. Briggs, who filed a friend-of-the-court brief in the Sonora case, heralded the decision as “a victory for the rule of law and for true majority rule.”

“Any developer who thinks that they’re going to buy their way to the ballot box is now going to have to do the work of actually persuading a majority of the voters,” said Briggs.

Wal-Mart has had mixed success at the ballot box. Voters in Inglewood shot down the company’s proposed superstore in 2004. But the residents of Menifee, in Riverside County, approved a Wal-Mart ballot initiative last year.

For more on this topic, see: