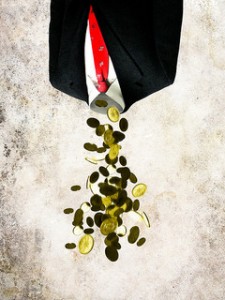 One state went red and the other blue in the presidential election, but citizens of Montana and Colorado agreed by vast margins that we need to amend the U.S. Constitution to revoke the overwhelming power of money over elections.

In Montana, early returns showed a whopping 75 percent of voters supporting Initiative 166, which directs Montana’s congressional delegation to help pass an Amendment to the U.S. Constitution that would revoke corporate personhood. In addition to overruling multiple instances of pro-corporate activism by the U.S. Supreme Court justices, such an Amendment would allow reinstatement of Montana’s Corrupt Practices Act, struck down by a federal court just months ago after it protected the integrity of state elections for 100 years.

In Colorado, Amendment 65 had won overwhelmingly with 73 percent of votes as of this writing. The measure instructs Colorado’s congressional delegates and state legislature to support an Amendment that allows Congress and the states to limit campaign contributions and spending (presumably overruling Buckley v Valeo).

While Reclaim Democracy supported the measure, we share concerns ably expressed by Stephen Justino of Colorado Move to Amend in this op-ed, saying Amendment 65 should have confronted corporate personhood directly. It’s dubious whether the current Supreme Court justices would interpret an Amendment enabling states to regulate campaign spending as applying to “independent expenditure.s ” Notably, the claim that independent expenditures are non-corrupting — the basis of Justice Kennedy’s opinion in Citizens United v FEC — was shown to be fictional by revelations here in Montana (Reclaim Democracy’s home base) this week. Both initiatives were funded by their respective state Common Cause chapters and enjoyed support from a wide range of citizen groups.

In addition to calling for an Amendment to revoke corporate personhood, Montana’s I-166 adds “the people of Montana regard money as property, not speech.” Many state constitutions demand amendments address only one issue, preventing a single ballot measure calling for both revoking corporate personhood and “money = speech.” However we urge any such effort combine both messages, even if two parallel initiatives are required.

Notably, in Montana’s most hotly contested races, the candidate supporting a ban on corporate electioneering won. Among them was Steve Bullock, who aggressively defended the Corrupt Practices Act all the way to the U.S. Supreme Court as the state’s Attorney General this year. Bullock, a Democrat, won the race for Governor.

Both the Colorado and Montana measures are symbolic since their “instruction” to legislators cannot be legally binding. Nevertheless, we think their overwhelming popularity will build further momentum created by more than 100 communities passing local anti-corporate personhood measures in recent years. They’re the next logical progression in building a Democracy Movement to educate and organize citizens to reclaim democracy from corporate corruption. Congratulations to all who worked on these measures for their resounding victories!

Why is Montana at the forefront of this struggle? See Roots of Rebellion: Why Montana is the Only State to Reject Citizens United.

We emphasize that it’s not just Montana and Colorado. More than 400 cities and towns have passed resolutions or ordinances measures calling to end corporate personhood or have serious efforts underway. The votes typically are won by huge margins. Many of the efforts were coordinated through Move to Amend, a broad national coalition with more than 150 chapters nationwide and nearly 250,000 endorsers. Some examples:

There’s little doubt that a movement is gathering force, not just to overturn Citizens United, but to reverse the precedent of corporations enjoying “constitutional rights.” Notably, Montana’s initiative was the first of its kind we’ve seen covered by the Wall St. Journal. A majority of Americans want to limit undue corporate influence and have for some time. Yesterday’s results indicate we’re increasingly ready to put those beliefs into action.

You can read the full text of the Montana or Colorado (pdf) initiatives and see the language of Reclaim Democracy’s Proposed Constitutional Amendments.

For background, see our comprehensive introduction to Citizens United.

“Indeed I tremble for my country when I reflect that God is just: that his justice cannot sleep for ever...”