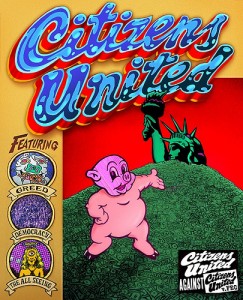 For anyone who opposes excessive corporate influence over government, these are encouraging days: there’s now a widespread groundswell of support across the country to overturn Citizens United and deprive corporations of their improper status as “people”.

However, we’ve noticed a misconception spreading that Citizens United is an extension of corporate personhood. It’s not.

It’s true that Citizens United strengthened First Amendment protections for corporations. But the basis for that protection isn’t corporate personhood. Rather, the court’s decision rests on two other assumptions:

That second point is the kicker. If corporate personhood ended tomorrow, it wouldn’t affect Citizens United at all, because non-persons have speech rights now too. If your underpants could talk, they would be protected by the First Amendment.

How do we know this? First, look at some relevant text in the majority opinion, written by Justice Kennedy:

Premised on mistrust of governmental power, the First Amendment stands against attempts to… distinguish among different speakers, which may be a means to control content.

In other words: the identity of the speaker is irrelevant. Justice Scalia drives this point home in his concurrence:

This is a key point for those of us who hope to reign in excessive corporate influence through a constitutional amendment. It’s not enough to merely revoke corporate personhood. To overturn Citizens United, we also have to overturn the two assumptions listed above.

Luckily it’s not difficult get the language right. Both Reclaim Democracy and Move to Amend have proposed amendments which would do so. For example, rather than simply establish that “Corporations are not people,” Reclaim Democracy’s amendment specifies that “the U.S. Constitution protects only the rights of living human beings.”

It’s a small difference in language with big implications. Let’s make sure that all who advocate for an amendment understand the distinction.

“In every human Breast, God has implanted a Principle which we call Love of Freedom; it is impatient of Oppression, and pants for Deliverance”